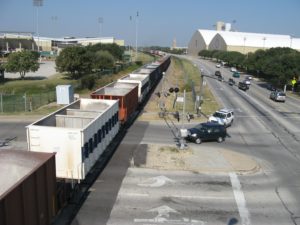 The Texas Department of Transportation (TxDOT) Bryan District began studying improvements to the intersection in summer 1999. Two public meetings were conducted for the project in 2002 and 2005 and a public hearing was held in 2007. In 2008, the Federal Highway Administration (FHWA) issued environmental clearance for improvements to the intersection, which included a grade-separated interchange to eliminate conflicts among vehicles, bicycles, pedestrians and trains and increase the capacity of both Wellborn Road and George Bush Drive. This approval allowed TxDOT to continue with project development, but funding for right-of-way acquisition or construction was not identified.

These proposed improvements identified nearly a decade ago called for partial or full closures of the Bush-Wellborn intersection for at least 6 months or more and the entire project lasting 2 years or more. This schedule might result in detrimental effects on day-to-day through traffic and adversely affected academic and athletic activities on the Texas A&M campus. The challenge is how to improve the intersection, while maintaining vehicular, pedestrian, bicycle and railroad safety and traffic flow without extensive loss of mobility, negative effects on the campus and nearby neighborhoods, and unreasonable additional costs to the project. As a result, TTI and TxDOT are in the early stages of re-engaging multiple stakeholder groups to gather input about project design options; construction staging and closures; community and campus effects; mobility management during construction; and other innovative opportunities to improve this project.

The complexities of the interchange, such as throughput, accessibility to the campus and nearby homes and businesses, and minimal visual and construction impacts to surrounding neighborhoods, require that planning and construction be phased to ensure the least amount of disruption to the area, while also maintaining the integrity and tradition of the Texas A&M University campus and the surrounding community.